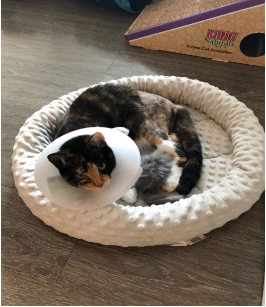 Curious if whether or not pet insurance is worth the investment? We sat down with USI Affinity’s Arielle E. to hear about her and her kitten's, Marmalade, recent "cat-tastrophe":

Working in the insurance industry, you think you know everything there is to know about insurance protection. We speak often about preparing for the unexpected, educating everyone about their inherent need for various forms of financial coverage. However, no level of expertise can shield you completely from shock when the formidable ‘unexpected’ happens— but having even a basic understanding can help prepare you financially.

If you asked me three months ago if I ever wanted a cat, I would have immediately said “I’m a dog person.” But the moment I saw that little calico kitten at the local animal shelter, I knew we weren’t going home without her. Now six months old, Marmalade is our pride and joy— a curious little lady who loves to explore, jump and play at all hours of the day and night. Seeing how healthy and active she was, I admit that I took my time browsing through different pet insurance plans to make sure we were getting the best bang for our buck. I decided on a plan that best fit our needs through Hartville. And thank our whiskers I did.

About two months into owning Marmalade, the unexpected happened. On an uneventful Friday night, Marmy jumped suddenly from my arms and landed on her feet— as you expect cats to do. However, that was just the problem. We knew something was wrong when she limped away, refusing to put pressure on her hind leg. Thinking that there was ‘no way’ that a short drop could be at all dangerous for a brave kitten accustomed to jumping all over that apartment, I figured it was just shock. But, when Marmalade had refused to move all night and howled with heart breaking cries when we placed her carefully into her carrier— we knew it was serious.

We were at the veterinary office the moment they opened the next morning. I felt a huge wave of relief when they took us into one of the exam rooms, thinking that everything would be OK now. However, we were sent immediately over to a pet emergency room facility in order to have x-rays done. ‘How could a short fall end in x-rays?’ I asked myself several times on our ride to the ER.

The vet techs were quick to take Marmalade in the back for an exam. “She is going to need x-rays for us to know for sure what is wrong,” the tech told us. “The x-ray will cost about $400 and the exam is $110. But we have our surgeon onsite who will look at her for no extra charge.” Normally I would appreciate the transparency the facility exhibited over the cost and the willingness to have an expert come in and look at our kitten at no extra charge to us— but all I heard was “surgeon” and my heart broke at the thought of our tiny kitten needing surgery. Like most pet parents, cost felts like the least of our worries when considering the best course of action for our beloved pet, but the numbers were certainly startling after the fact.

“I have some bad news,” she said pulling us up to a lighted screen displaying Marmalade’s x-rays. The surgeon explained the issue and gave us all of our options, but in the end the best course of action for Marmy’s quality of life was to have a femoral head ostectomy (FHO) surgery done to repair a deep fracture. It was then, while signing the authorization papers, that we had to face the excruciating reality many pet parents grapple with at some point or another—the real cost of pet ownership. The surgery, post-op care, x-rays and medications were going to cost us a staggering $3,356.27. Make no bones about it, we would have gladly paid double to help our Marmalade get back to feeling normal—but I began to understand first hand how cost can be a real hurdle for pet owners when choosing the best care for their fur babies.

And that’s when we remembered we had pet insurance.

Immediately, we called the number on our policy and they talked us through our benefits and the process for filing a claim in order to receive the appropriate reimbursement. Then, we said our teary goodbyes to Marmalade before she went into surgery and left knowing she was being taken care of physically and that we were taken care of financially.

Insurance pared our over $3k surgery bill down to just $400. Having pet insurance did so much more than just promise us a percentage of our money back, it allowed us to more easily push cost aside and focus on what was best for Marmalade.

Little Marmalade is now on the mend and already back getting into trouble, as any kitten should be. We never thought we would need to take her in for surgery, especially while she was so young, but that’s why we in the insurance industry say often to ‘expect the unexpected.’ They say cats always land on their feet, so make sure that your finances do too.

Learn more about pet insurance on the AAP Insurance website or get a quote.

Arielle is a Marketing Project Manager for USI Affinity. She is a 2014 graduate of Norwich University with a Bachelor of Science degree in Communications. In her spare time, she enjoys writing, trail running and taking Marmalade on adventures in her backpack carrier.