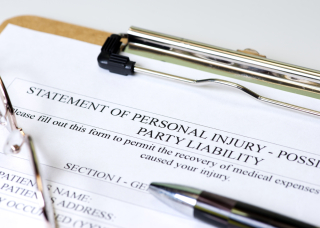 The average income in the US for 2017 was roughly $73,0001.  The average personal injury claim in the United States settles for $53,0002  (unsurprisingly, this number increases considerably when plaintiffs retain an attorney, and file a lawsuit). When compared to the annual household income, the income-tax-free nature of monetary recovery from personal injury lawsuits3  appears quite attractive. Further, as advertised on radio, television and the internet, plaintiff’s firms work on a contingency fee, with virtually no risk to the plaintiff. Coupled with the “American Rule” for lawsuits (i.e. that the losing side does not pay costs) there is no disincentive to filing a personal injury lawsuit. Moreover, the fact that modern medicine has improved so much, in terms of ease of surgery (e.g. arthroscopies), decrease in risk, and an increase in the prevalence and use of ambulatory surgery centers, to name a few, only compounds the likelihood that a plaintiff will have surgeries today, resulting in an increased payout per case.

The increased value of personal injury claims presents corresponding increased risk to the lawyers who handle such claims.  Miss a statute of limitations or fail to properly prosecute another aspect of the case and all of a sudden, the claimant may be seeking to obtain that big payday from you, and/or your insurance carrier.  In addition, although many think that there is no backlash due to the increased value and number of personal injury claims, the opposite is true. Insurance rates and taxes both increase when insurers and government entities are forced to pay higher settlements or verdicts. Paying less for insurance premiums leaves the consumer, you and me, more money to spend elsewhere, and governmental entities having more available funds (that are not spent on lawsuits), should allow for beneficial government spending, such as infrastructure.

Attorneys will often describe a high-value injury, usually one that involves significant internal damage, or more likely, surgical intervention as a “good injury.” Although typically not “good” for the plaintiff who has had a severe injury, it can be financially lucrative. With the increased claims of Traumatic Brain Injuries (TBIs)4 , shoulder surgeries5, knee and back surgeries6 it is not surprising that settlements are increasing – “good injuries” are easier to come by.  Some examples are included below:

There is no doubt that some surgeries and treatments are beneficial, however, two specific injuries have been appearing more regularly in personal injury lawsuits:

The difficulty in assessing and valuing the TBI is that, with rare exception, plaintiffs do not have regular cognitive or personality examinations to have a control for their “normal function.” This leaves the only line of defense as the defense expert (usually a psychologist, neurologist, or neuropsychologist) to testify as an expert after meeting the plaintiff for one session, while having the uphill battle of challenging plaintiff’s treating physician, who has often had the opportunity of seeing plaintiff for years before getting to the point of trial. The only alternative option is attempting surveillance to show a jury that plaintiff lives a “normal life” – but this too can be disputed by a plaintiff who is well-prepared before testifying. A sympathetic plaintiff, and testimony from family and friends as to how plaintiff used to behave pre-accident, will beat a defendant’s neurological expert any day.

Spinal surgery, of various types, has increased in the last number of years, as: 1) surgeries in general, have become less dangerous, and 2) there are several subcutaneous, outpatient procedures available. However, no matter how small the back surgery is juries are sympathetic, likely due to the common belief that back surgery carries with it a risk of paralysis.10

Plaintiffs will continue to make these claims for TBI and back surgeries because people (including judges, juries, mediators, and even defendants, at time) are sympathetic to brain and back injuries. Perhaps the more sinister reason, is that there is profit to be made.

Arthroscopic surgeries have become so effective and commonplace, that they are no longer seen as obstructive to living a regular life. Although they still have value, most people go on to lead regular lives post-surgery. The downside of these surgeries being relatively cheap and effective, is that they are performed almost as a matter of course. Thus, the plaintiff who once would treat a shoulder or knee more conservatively (which kept the case value low), will likely undergo surgery which, again, increases the value of the case

Nevada Rule of Civil Procedure 68 encourages settlement, and discourages pursuing frivolous lawsuits by stating that any party who: 1) declines a pretrial offer of judgment (a formal settlement offer), and 2) fails to obtain a better result at trial, is liable for reasonable attorney's fees and costs incurred by the offering party after the offer was made.

One way that a similar rule could work would be, for example, if a defendant offers $100,000 six months before trial, the offer is rejected, and the jury comes back with an $80,000 verdict, the plaintiff would have to pay all costs associated with the six months leading up to and including the trial. Likewise, if plaintiff makes a $100,000 demand three months before trial, and defendant rejects the offer, but the jury comes back with a verdict of $150,000, defendants would have to pay that verdict as well as the costs from the time of the offer through trial. The more confident party would make such an offer early on, and use it as a bargaining chip during the litigation, and especially for settlement purposes.

Another method, sometimes employed in automobile cases in New York, would be to have a floor and ceiling value for the case. If the plaintiff believes that the case is worth $1,000,000 and defendant believes that the value is $500,000, the parties can agree that the parameters of damages, that if defendants win, they will pay out $250,000, and if the plaintiff wins, the maximum award will be limited to $750,000. This allows the plaintiff a guarantee of payment, and defendants have the benefit of limiting their exposure – in other words, it takes the damages award out of the jury’s hands, leaving them only with a decision as to liability. This method can also work well for arbitrations (which may further lower litigation costs, and increasing the speed of litigation).

Finally, there is the idea of tort reform and limits on certain types of lawsuits. For the interested reader, we refer you to “State of Liability, New York’s Costly Tort Laws and How to Reform Them,” by Cary Silverman and Mark Behrens, December 12, 201711.   Although specifically tailored for New York, the authors offer several solutions, virtually all of which require the legislature to intervene in order to reduce the estimated $20 Billion annual cost to New York State (or $2,700 per household) due to New York’s current tort system (including Labor Law §240, unlimited awards in medical malpractice cases, little or no responsibility on the part of the plaintiff, and 9% statutory interest, to name a few).

In sum, surgery is more prevalent, and although it may help many individuals, it comes with a cost.  The increased value of personal injury actions presents corresponding increased risk (as well as reward) to attorneys handling such claims.  Practitioners must be conscious of all deadlines, including statutes of limitations, and make sure they adopt appropriate risk management and risk transfer techniques to address the increased possible exposure.

In addition the added cost of handing such claims is ultimately passed on to insurance companies, or municipalities, which then pass those same costs onto you and me. The best defense is both sensible and aggressive, while remaining reasonable and not running up costs without a benefit. Fairness and objectivity will benefit everyone.

[10] The authors will leave the actual “risk of paralysis” discussion for physicians, but it appears that it is minimal https://uamshealth.com/medicalservices/neurosciences/neurosurgery/paralyzedafterbacksurgery/.

This article was prepared by Andrew Jones and Nir Gadon of the New York City-based law firm of Furman Kornfeld & Brennan LLP. Andrew and Nir work as part of a team of 15 lawyers and paralegals devoted to the defense of attorneys and other professionals in malpractice and disciplinary matters, as well as the defense of construction and personal-injury accidents. For more information about the above topic or the authors, please visit: www.fkblaw.com.

We trust that the above article was useful and thought-provoking; however, please note that it is intended as a general guide and opinion only, not a complete analysis of the issues addressed, and readers should always seek specific legal guidance on particular matters. For more information on LPL coverage generally, click here.

Posted at 09:58 AM in Professional Liability Insurance | Permalink | Comments (0)